Shoppers were treated to supersized bling last week when a giant Crystal Clipa appeared on the Reuters Sign in the heart of Times Square at 43rd & Broadway. One of the most visible and engaging displays in Times Square, the sign soars 23 stories into the sky and reaches more than 1.5 million people per day. Situated on the corner of the building at 3 Times Square, the mammoth sign can be seen for several blocks down 43rd Street and even can be seen as far away as Central Park. It reaches more than 1.5 million people a day. The polished silver Clipa shown had clear and sapphire Swarovski crystals–one of 27 million possible combinations that can be created using our Custom Clipa software. Visitors to www.clipa.us can create a Custom Clipa purse hanger in less than 5 minutes, placing Swarovski crystals in one of six positions on a ‘virtual’ Crystal Clipa. Custom Models like the September birthstone example seen in Times Square are then made and shipped in 48 hours. Birthstones of children and siblings are popular; so are college and pro sports teams. A state’s or country’s colors–even those celebrating special events like Mardi Gras’ purple, green and gold–can be created. Best of all, there’s NO additional charge for this service. A custom gift in minutes under $40? Think outside the bag: Think Clipa! 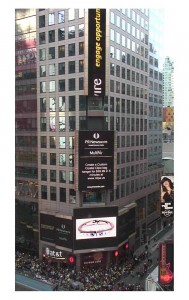