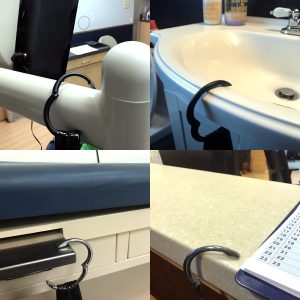 According to the CDC, the worst flu season in a decade has peaked nationwide. Although fewer cases are being reported, viruses, germs and bacteria can live on many surfaces for hours. You can reduce your exposure with hand sanitizer, wipes, washing hands well, and keeping your handbag off the floor wherever you go. A Clipa handbag hanger can be used at doctor’s offices, dental checkups, bathroom sinks and stalls where there isn’t a hook on the door. It’s also useful on shopping carts, in dressing rooms, and salon chairs to keep the bottom of your bag clean. Flu season can last until May–keep your immune system strong and your handbag clean for a happier Spring.