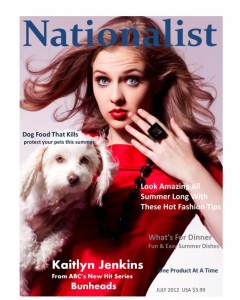 The July 2012 issue of The Nationalist Magazine features an article on the Top 20 Products Made in America. Coming in at number 7 is the Clipa purse hanger. This sleek handbag accessory has been tested to last for 10 years of daily use as well as independently lab tested to hold far more than its stated weight of 45 lbs. Made from certified sources, Clipa’s clever design is gaining fans worldwide while supporting American jobs.

Clipa a Last Minute Pick for Mom in Philly’s Examiner

Robert Verdi presented his fashionable picks for Mother’s Day at his Twitter Party in NY tonight. Robert’s top picks included the always stylish Clipa purse hanger. He tweeted, “for the mom on the go, the perfect gift is Clipa. It’s the instant handbag hanger!” And later: “With 12+ finishes the Clipa matches ANY handbag! Leave it on the bag, too- it’s always handy when you need it!” Thanks, Robert!

WGN’s Val and Ana Put Clipa To The Mommy Test

“I love this product!” said WGN’s morning mommy after reviewing Clipa on this morning’s segment. Check it out:

Clipa Always In Style at Weddings

This month, D Weddings, Shop Talk and Bridal Buzz have been buzzing about Clipa: