We love the pop culture phenom that is Comic-Con. For 130,000 attendees, it’s nerdvana. For Clipa, it’s just another day conquering germs in the universe. For the last 3 years heroes, superheroes, antiheroes and others have discovered Clipa, the strongest purse hanger on the planet made right here in Southern California. 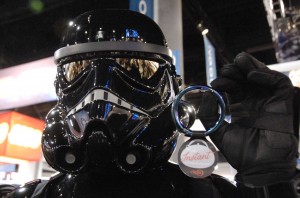 Last weekend, Clipa was at Comic-Con where, for the second year in a row, we delighted fans with instant giveaways of the instant handbag hanger. Cyborgs, superheroes, stars, fanboys (and girls) were out in force for all the panels and the parties. Former San Antonio Spurs center David Robinson picked up a Clipa purse hook for his wife as did this intergalactic traveler, who now won’t go anywhere without her Clipa: