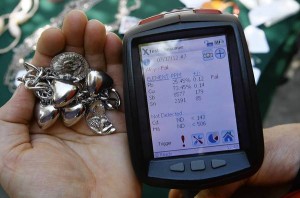 LOS ANGELES, CALIF. – JULY 17, 2012: A piece of jewelry containing unacceptable levels of lead on display during a press conference at Pershing Square in Los Angeles on July 17, 2012. Backing up repeated warnings about selling toxic jewelry, the California Department of Toxic Substances (DTSC) and the Center for Environmental Health (CEH) announced at the press conference that the state Attorney General’s Office has filed a complaint against 16 businesses that have allegedly been supplying retailers or directly selling Californians jewelry containing high levels of lead. In addition, CEH has initiated legal acton against nine jewelers for alleged violations of the state’s Proposition 65 law. Some of the toxic jewelry had labels claiming to be “lead free.” The jewelry items, most of which were discovered at Joia Trading, Inc., located at 1020 S. Crocker Street, Los Angeles, contained metals which are potentially toxic to people, especially young children. A total of 343 tainted jewelry items, some of which were imported from Asia, were discovered as part of DTSC’s ongoing efforts to protect consumers from unncessary toxic chemicals in everyday products. DTSC alleges the 15 other businesses named in the complaint supplied the lead-tainted jewelry to Joia Trading. Furthermore, DTSC and CEH discovered some jewelry items for sale which contained high levels of cadmium, a toxic metal. (Gary Friedman/Los Angeles Times)